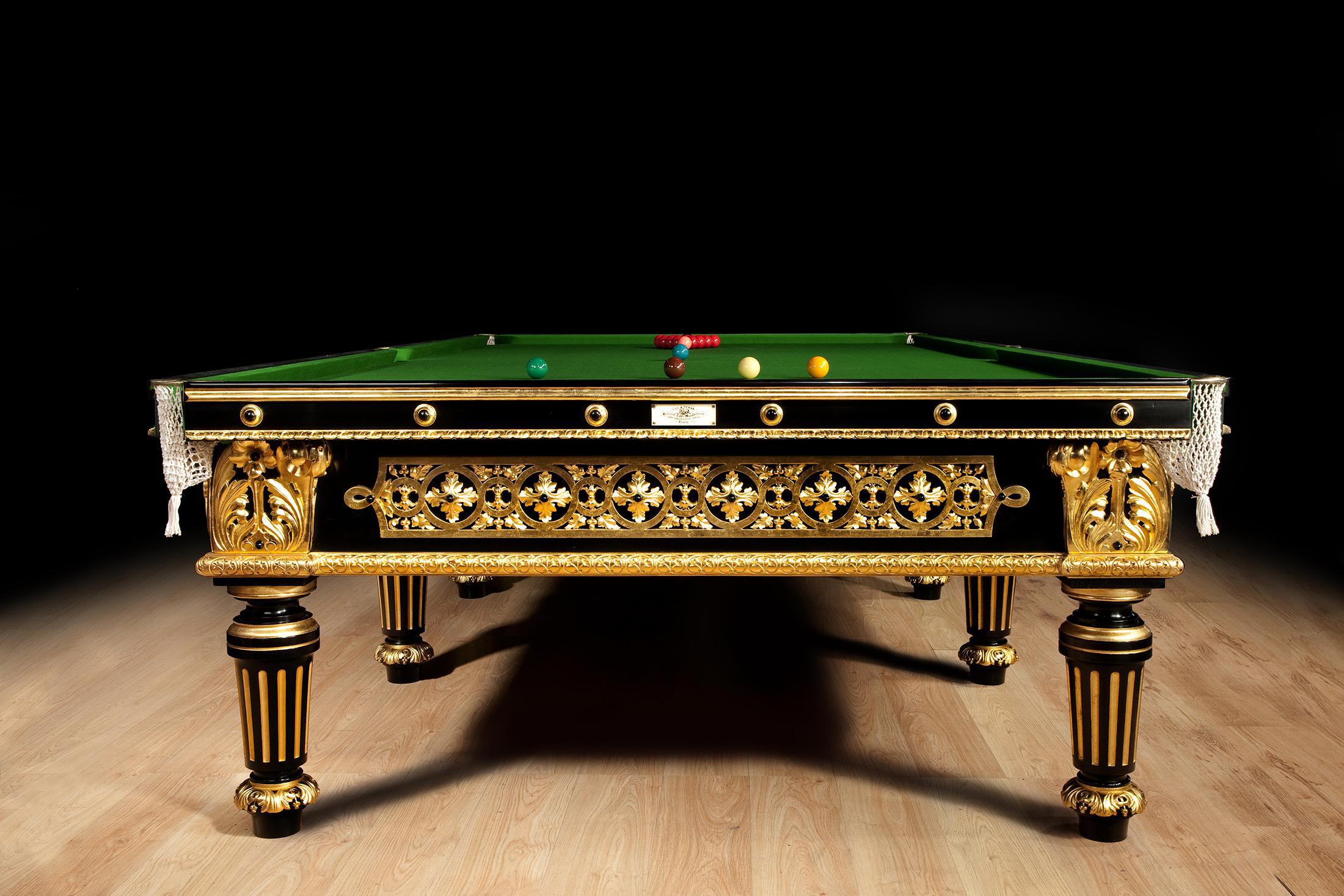 Add to Wishlist
Add to Compare

It is veneered in ebony with openwork gilt-wood panels applied to the sides and boldly carved and gilded acanthus leaf scrolls on the corners.

The panels are filled with small and large circular guilloche enclosing flower-heads with ebony centres and the lower borders are bright cut with fans of trefoils.

The fluting on the tapering legs are gilded as are the acanthus leaf caps on the feet. Bearing a maker's label Cox & Yeman, Billiard Table Manufacturers, 209A Brompton Road, London. English, circa 1895.

Footnotes: James Blyth, Ist Baron Blyth, 1841-1925, was a party-loving and philanthropic millionaire who created his wealth by founding the famous gin distillers, W A Gilbey & Sons. He bought no33 Portland Place, a Robert Adam house built in 1775 for Lord Henry Wyndham, in 1893. A man of great energy and innovation he carried out numerous improvements to the property including 'a remarkable Victorian extension, which included a stained glass billiard room. He also introduced some ingenious innovations such as a hydraulic wall, which separated the dining room from the music room. The ambitious design, which still exists in its original form, was powered by a water pump system concealed in the basement.' It is presumed that the stained-glass billiard room was built to house this impressive table. Cox and Yemen Mr Henry Cox and Mr Edward Yeman joined forces at some time in the 1850s to form their own billiard table company. It would seem that Mr Cox was already building tables but needed the expertise of Mr Yeman and his sister who were trained by Burroughes and Watts stuffing cushions and making Holland covers respectively. By 1864 they were fully fledged manufacturers of billiard tables and supplied specially made competition tables for the 1866 Oxford vs Cambridge match, Dufton's 'Great Handicap' and the hotly contested Roberts and Cook championships. By 1873 the company was located at 184 Brompton Road and listed over fifty titled gentleman as customers including: The Duke of Richmond, The Duke of Wellington, the Earl of Jersey, the Nwab Nizam of Bengal, H.M. the King of Siam, Chas. Dickens and 'the London Clubs'. In 1876 Yeman left the partnership but Cox carried on under the same name. In 1902 His Majesty the Shah of Persia, ordered two billiard tables from Messrs. Cox and Yeman. The tables were made of mahogany, with carved legs and fitted with this firm's well-known low cushion. During the Shah's tour he stayed at the Royal Palace Hotel, Ostend, and at the Elysee Palace Hotel, in Paris, both of these magnificent hotels have billiard tables fitted by Cox and Yeman. Always innovative Cox patented several products from 'Simplex' Combined Billiard and Dining Tables, Invisible Pocket Plates, 'Multum-in-Parvo' rosettes and 'Ovalex tables, a dainty arrangement in curving and rectangular cushions.' However, despite these novelties and sponsoring challenge matches, Cox and Yeman went into receivership in 1908 and were finally bought out by Messrs. Burroughes and Watts in 1911.

James Blyth, Ist Baron Blyth, 1841-1925 was a party loving and philanthropic millionaire who created his wealth by founding the famous gin distillers, W A Gilbey & sons.

Thank you for your enquiry.

We will get back to you soon.